Witchy Photoshoot with Eva and Kate 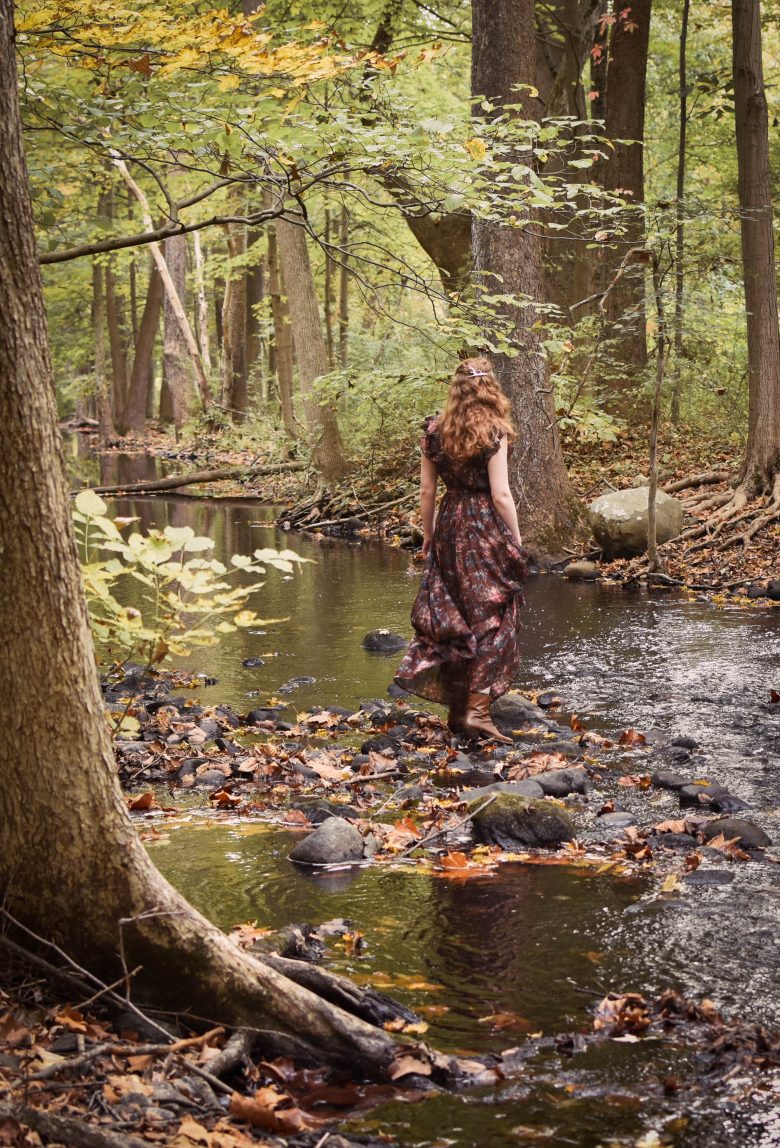 In honor of Friday the 13th, I’m doing a write up on a collaborative, concept shoot I did last weekend with my friends Kate and Eva. I can’t think of a better way to welcome October (scientifically proven, by me, to be the best month) than running around in the woods doing a witchy photoshoot, but if you have one, I’m all ears!

The concept was simple–dress/act witchy, take pictures–and boy do I feel like we knocked it out of the park.

Eva is also a photographer, and it was really fun getting to collaborate and bounce ideas off each other. We also thought it would be neat to both take a crack at editing all the photos, and I’ve really liked seeing where our selections and methods have intersected, and where they’ve diverged. 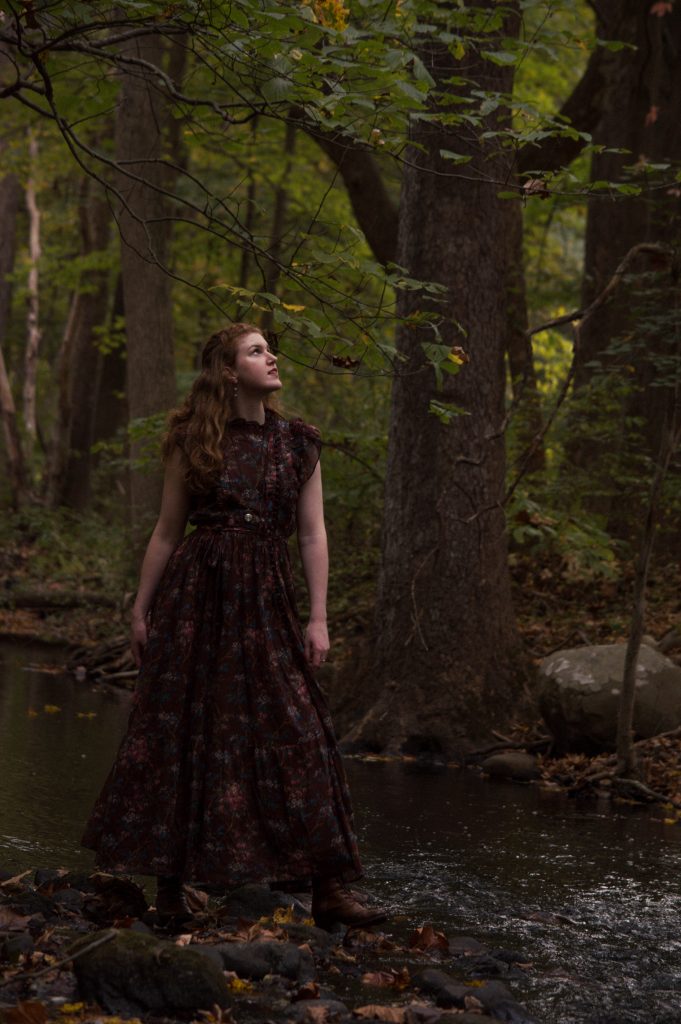 First off, let’s talk about Eva’s dress because It. Is. Incredible. That dress was actually the impetus behind the whole shoot, and it works so perfectly for all of this. The buttons! The ruffles! It’s sense of timeless romance! 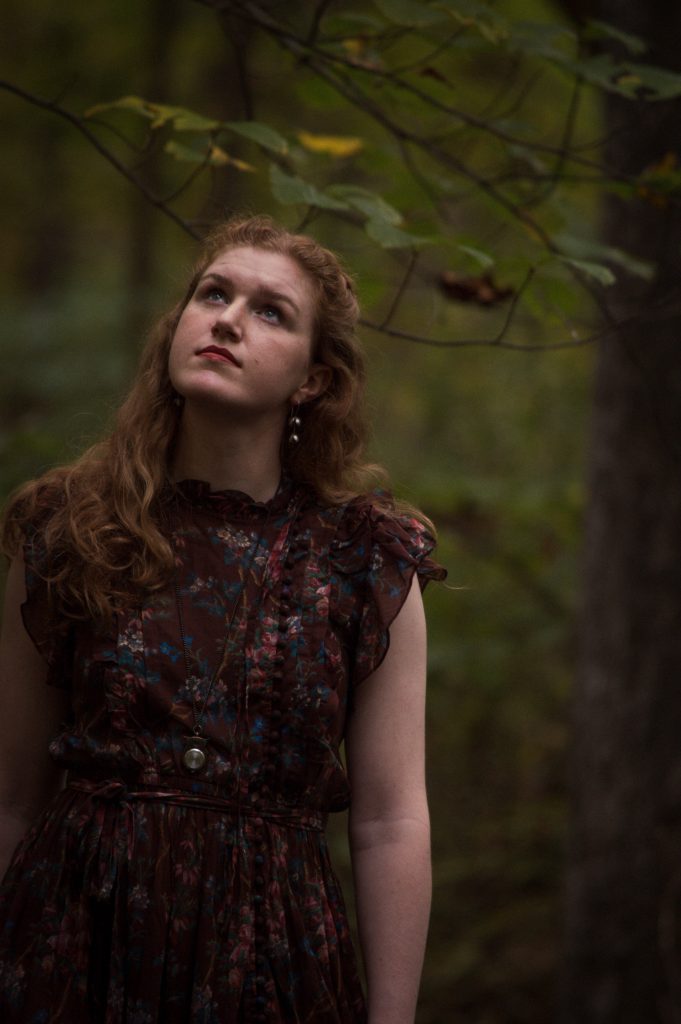 This is one of my favorite pictures of Eva that I took. I feel like it really captures her natural thoughtfulness without coming off as too posed. 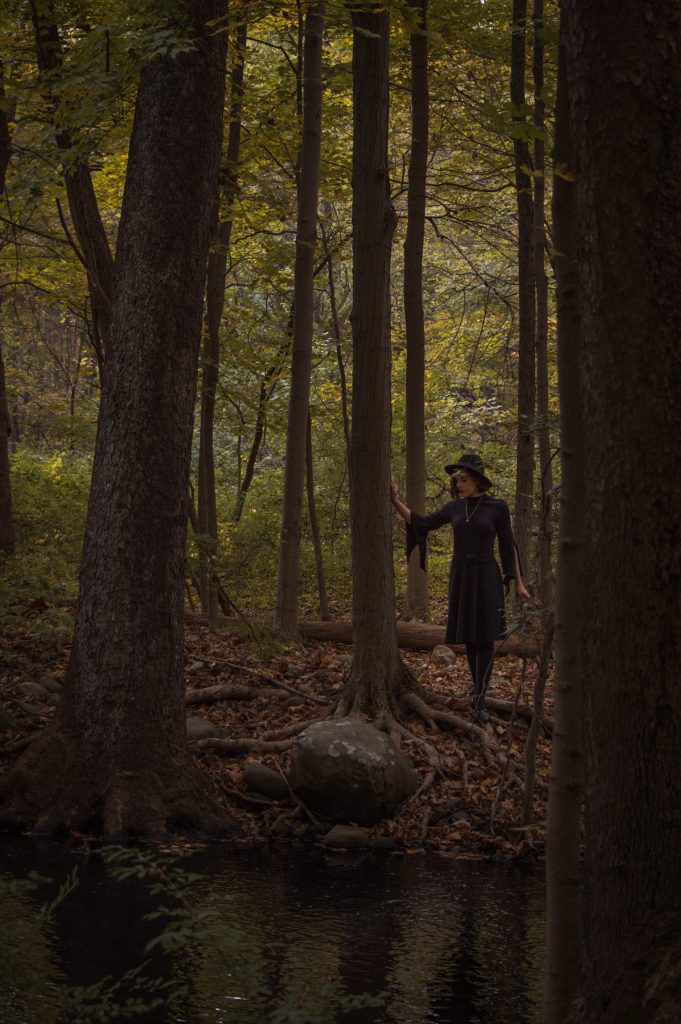 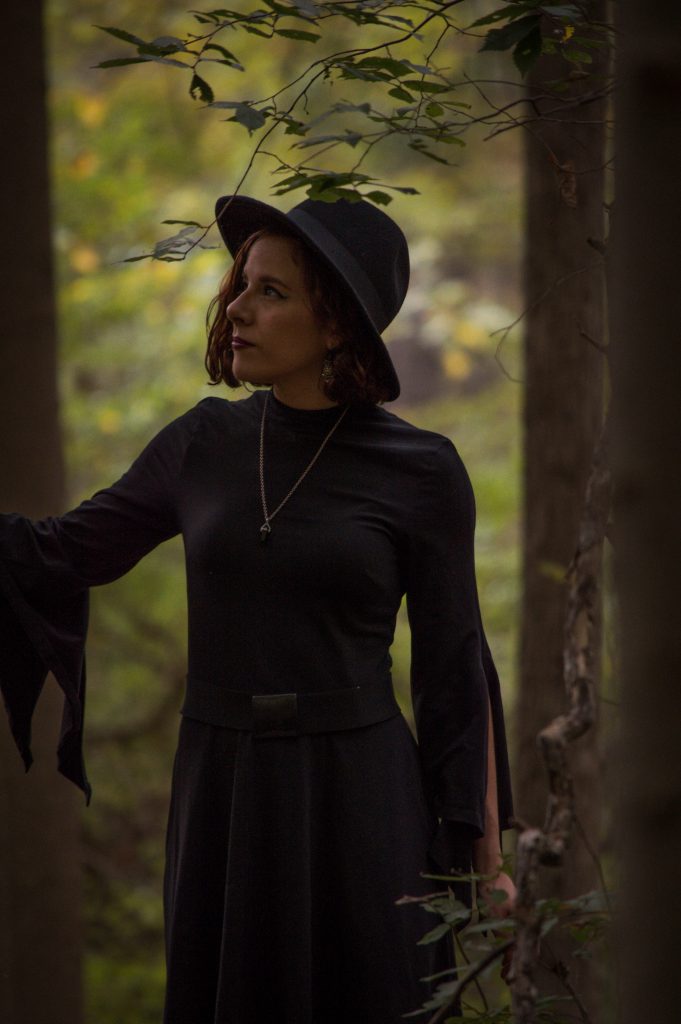 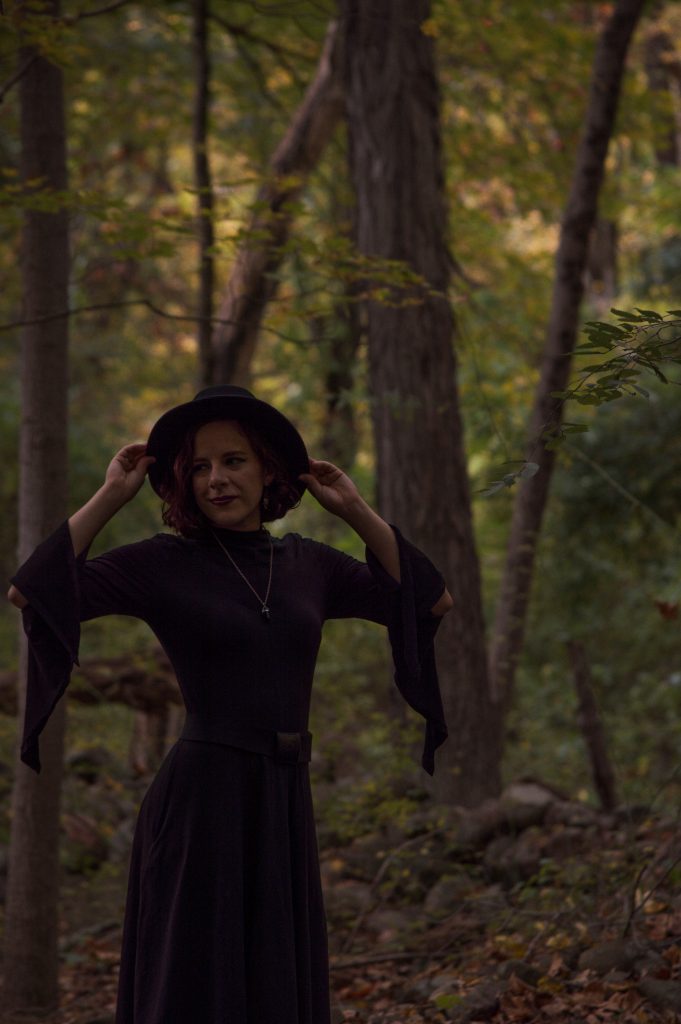 Kate definitely won the award for witchiest witch last weekend! I took all of the photos above with my telephoto, and it really shone here–not only letting me sit on the opposite bank of the river, but allowing me to play with some fun framing, all while still getting a nice, intimate portrait. I will say there is also a lot to be said for being able to take someone’s photo without being directly in their face. 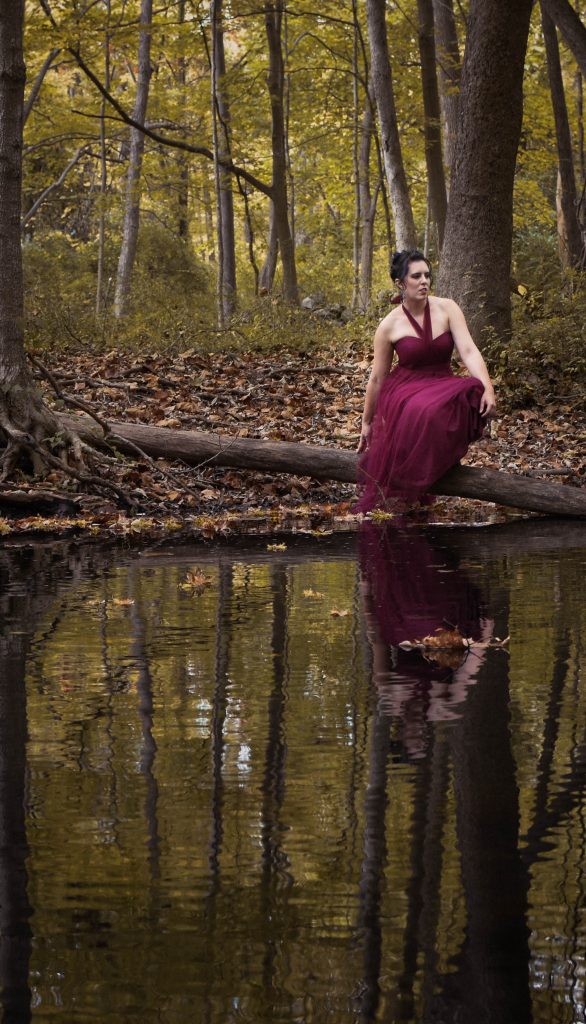 Surprise! That photo above is me!* Photographers do like to get our picture taken sometimes (at least I do…when I’ve had plenty of time to get my glamor on.). It’s always interesting being in front of the camera and seeing if you can follow the same instructions you give everybody else, all while posing on a very tippy log.

*All photos of/including me were taken by Eva. 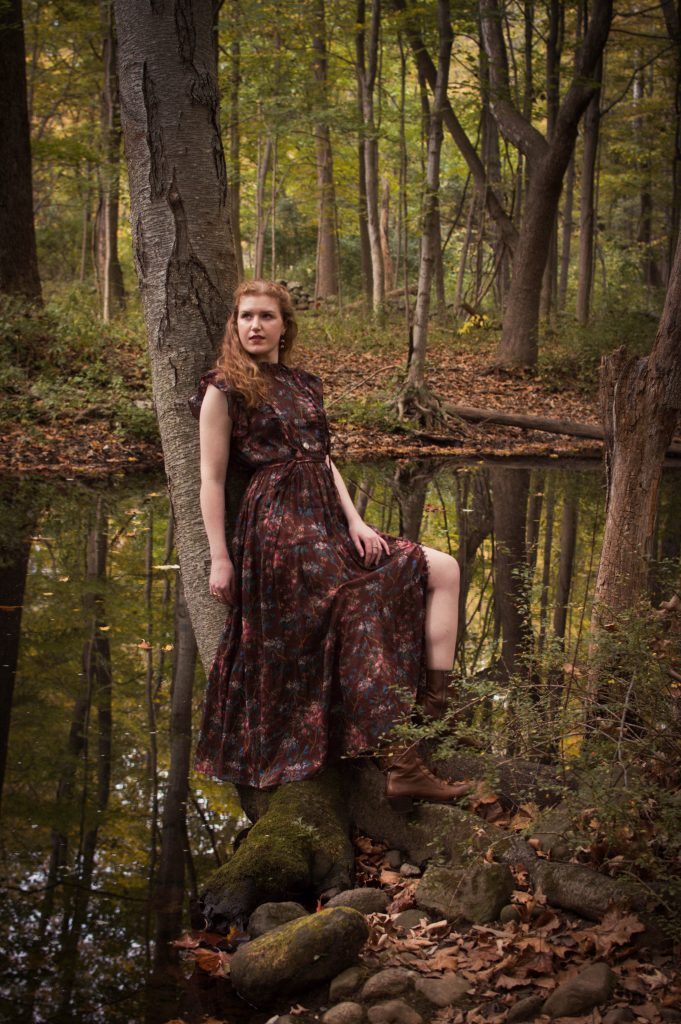 Let’s talk about editing for a second. Normally, when I edit portraits I try to keep the editing to a minimum so that the photos retain a really natural, authentic feel. Here however, I wanted to go for a really aesthetic vibe. (Yes, I know, I’ve spent too much time both on Tumblr and reading Wilde.)

To get the fall, filmy, look I wanted, I put together a preset that really bumped the oranges, and pulled down the greens–the initial photos were quite green (which is not my favorite if I’m being honest) having been taken in a forest–while keeping general saturation and contrast on the lower side. 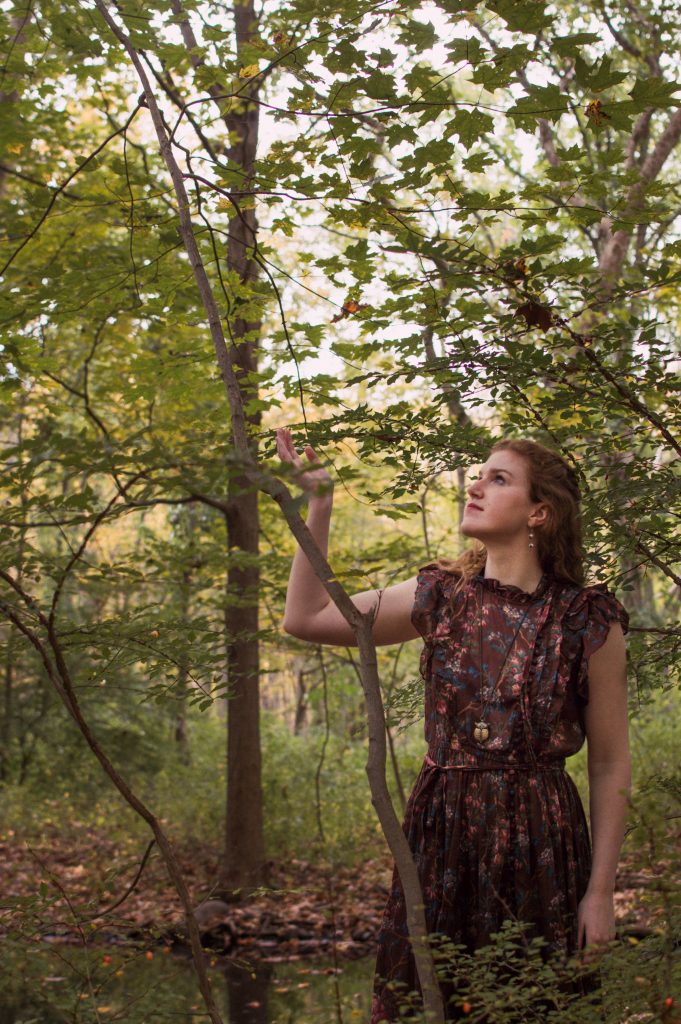 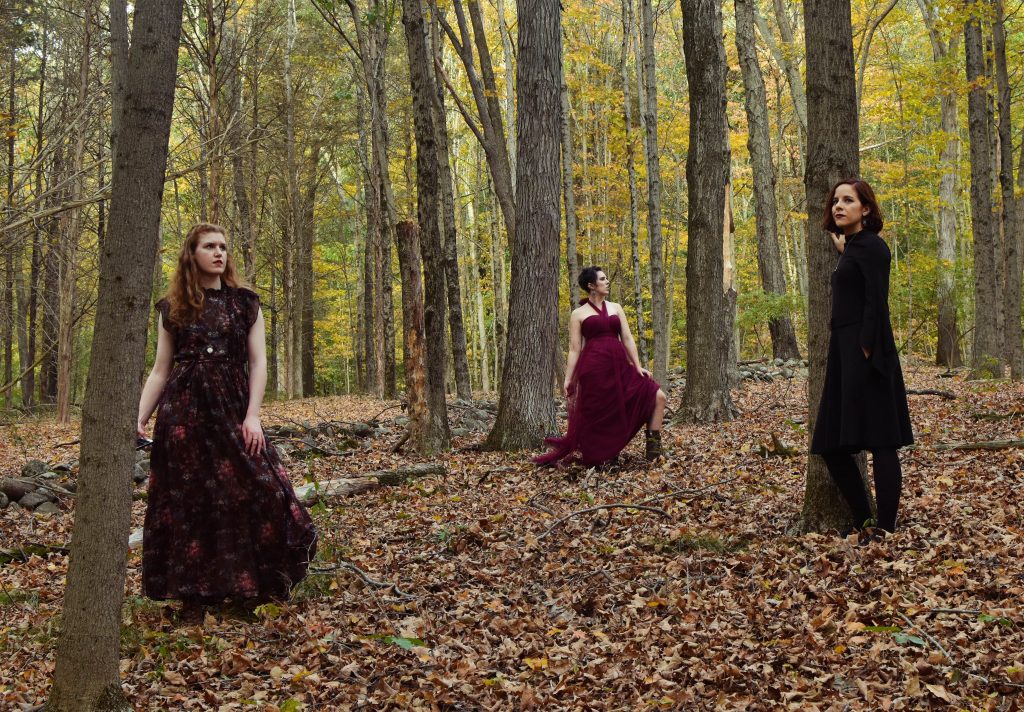 Eva has a fancy setup wherein she can remotely trigger photos…on her phone! She can even see the framing and everything, which is what allowed us to take this debut album cover shot. We had a lot of fun experimenting with it, and I love how this one came out. It’s also nice having a photo of all three of us! 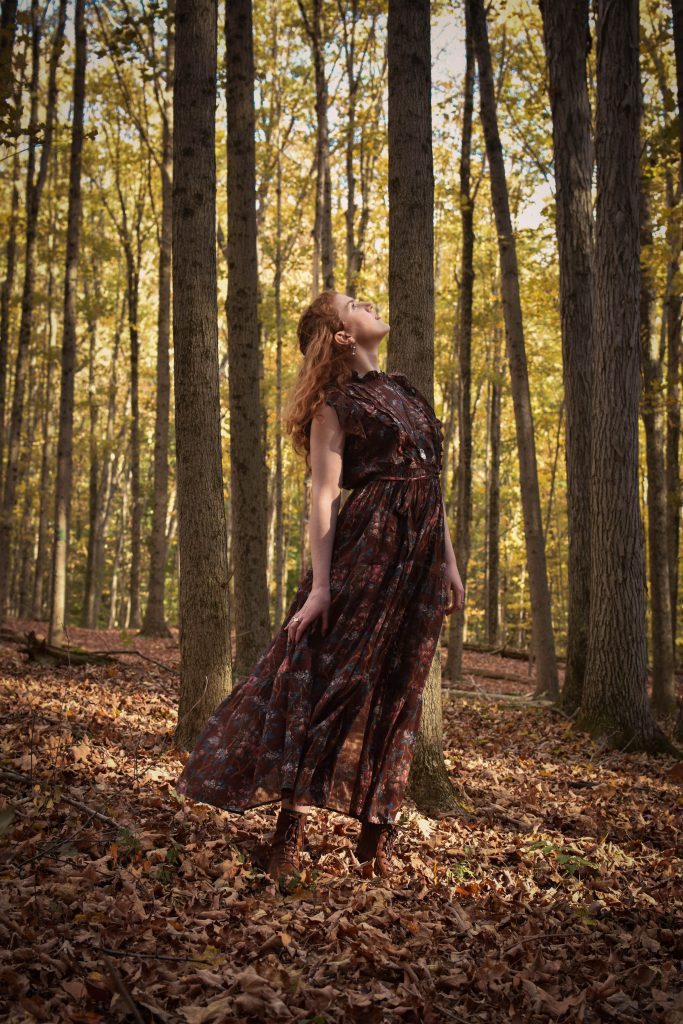 I love this photo a lot as well. It really feels like she’s part of the forest, and the light was quite obliging. 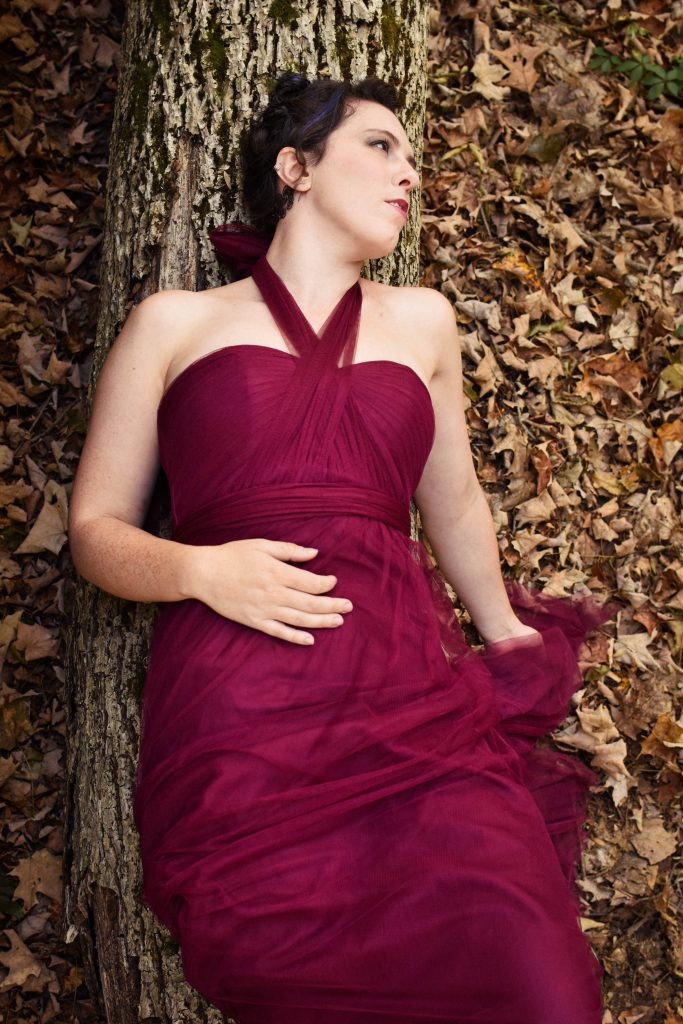 Eva took this photo going for an Ophelia-in-the-forest vibe, and I think it really worked. I love the cranberry pop of my dress against the leaves. Who says you can only wear a bridesmaid’s dress once? 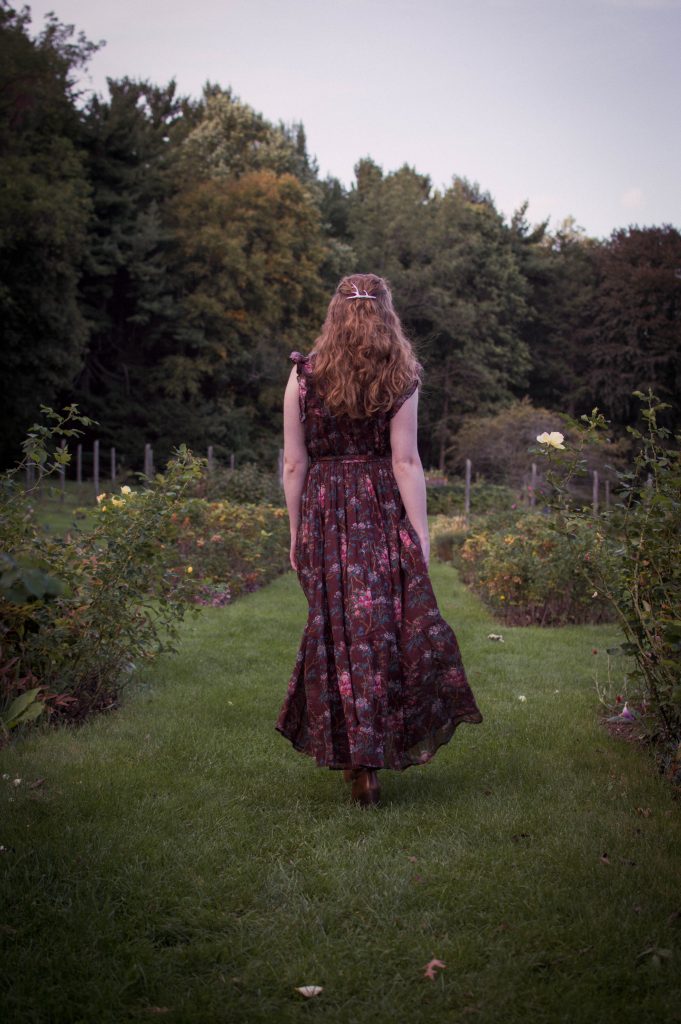 We left the woods to get some dusky garden pictures, and managed to find this lovely little rose garden (thanks, Google!). We had to get some pictures of that dress amongst actual flowers. 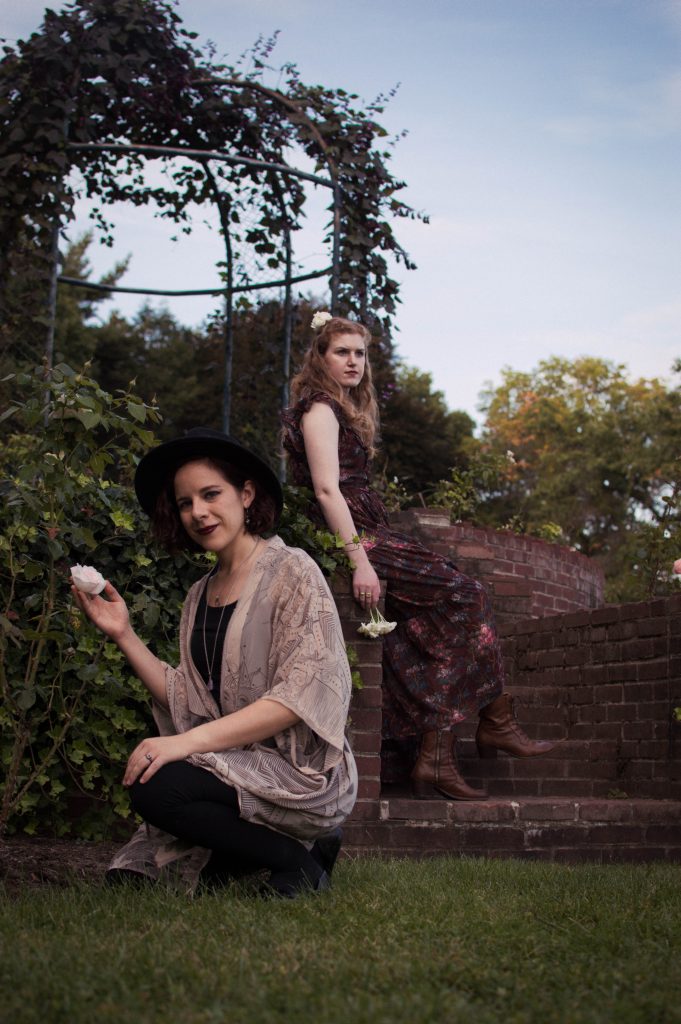 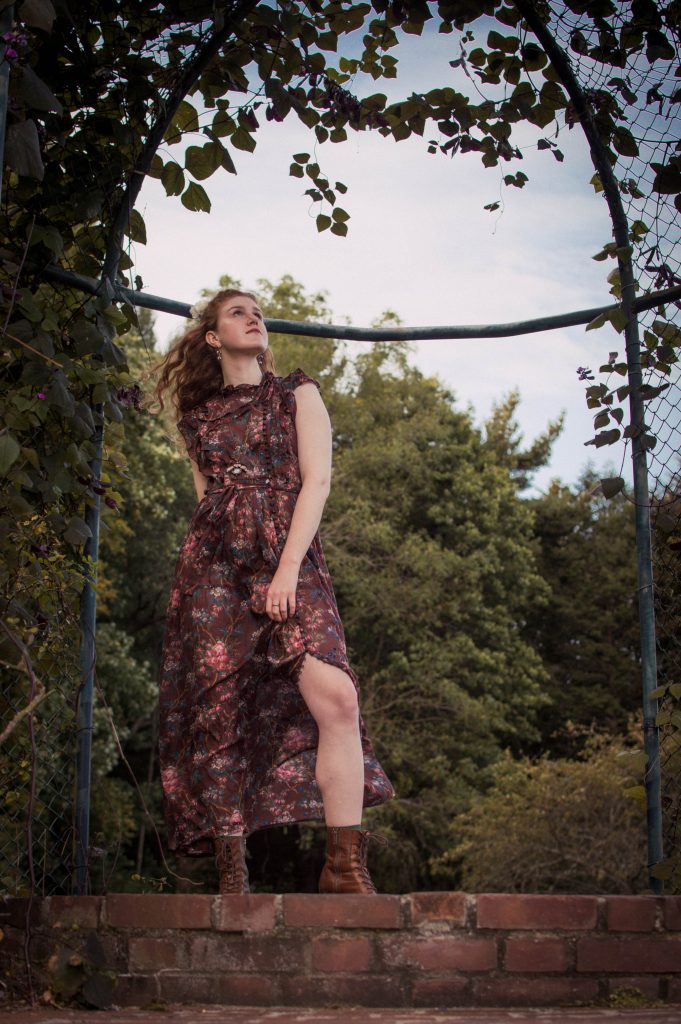 I don’t know how to describe the above picture other than epic! It feels like she’s got some noble plot in the works. That’s one of the best parts of concept photos, and the mark of good ones I think–the stories they imply. The old saying goes a picture’s worth a thousand words. If you can imagine a story, or want to the know the story behind a picture, it’s a success. 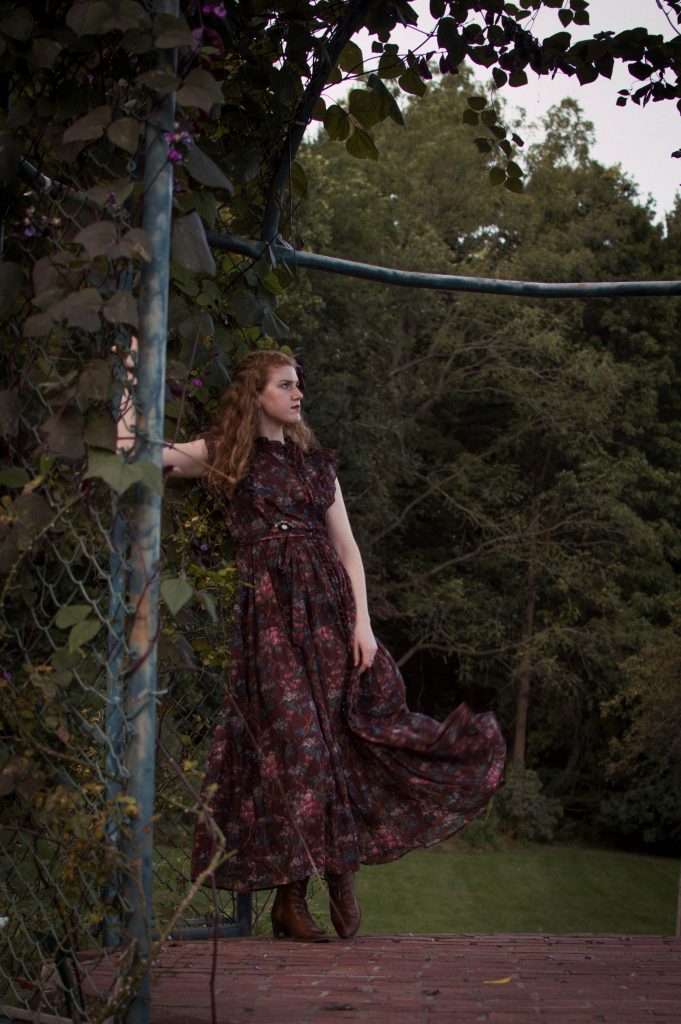 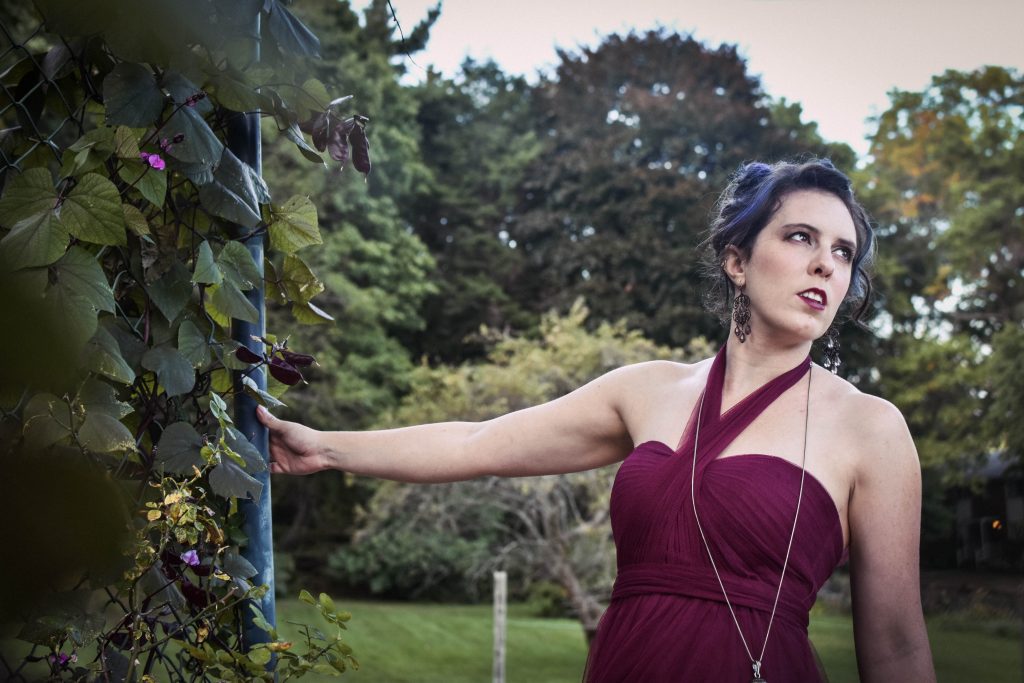 Eva really managed to capture the romantic vibe I was going for in the above picture. I love it, thanks Eva! 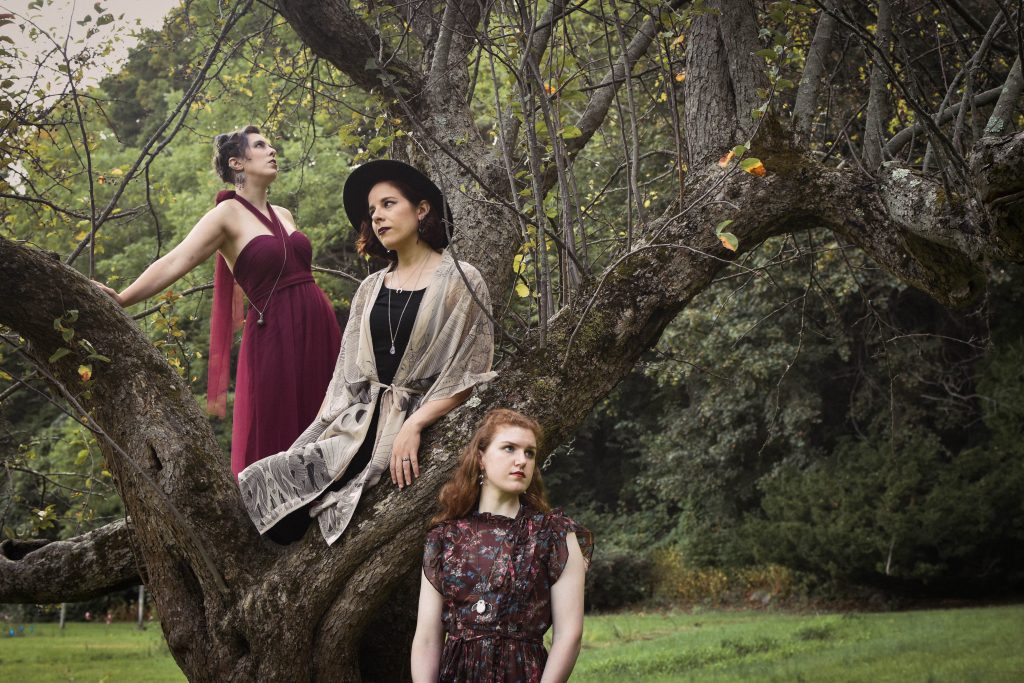 And, another band photo to round out our time in the garden. Max wistfulness. 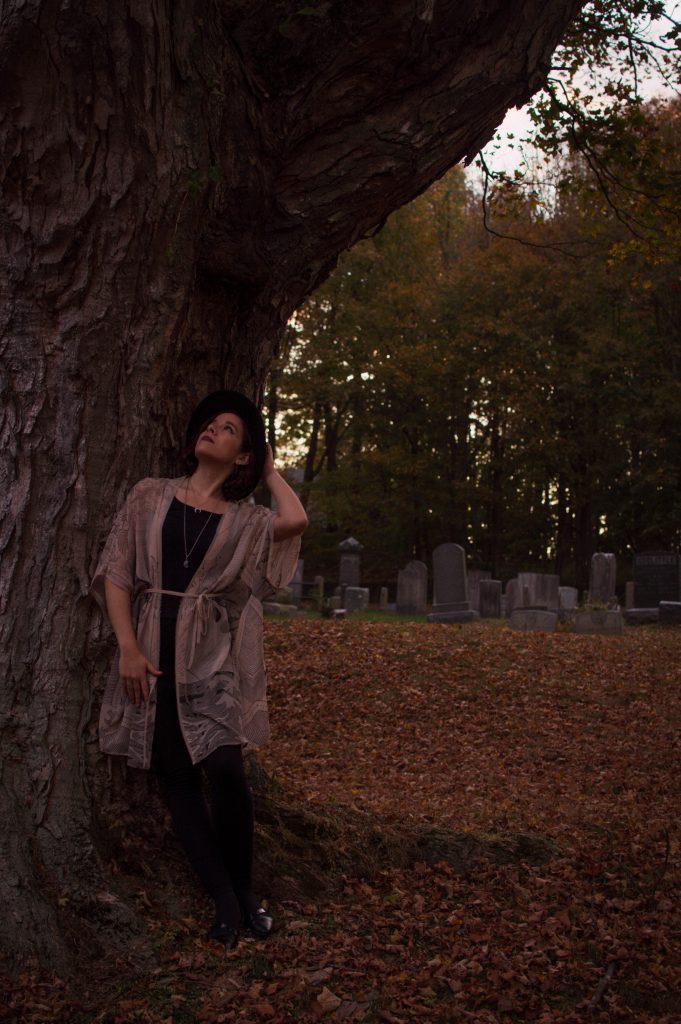 It wouldn’t be a witchy fall photoshoot without some quality time spent in a graveyard! The light was so incredibly orange when I took the above photo I didn’t even need to put my preset over it! 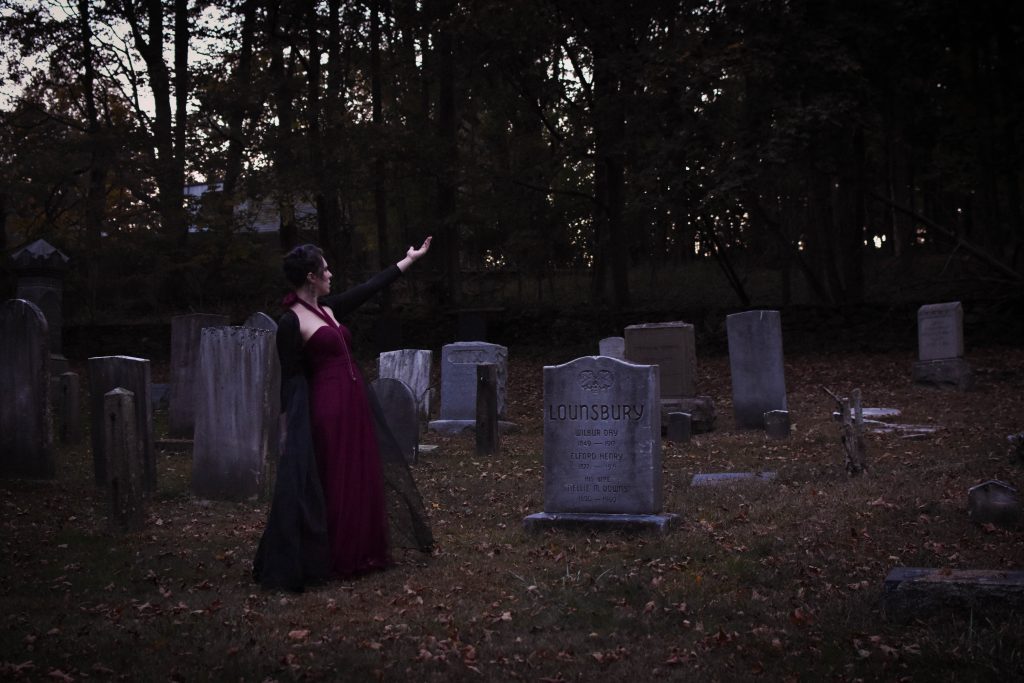 Just, you know, summoning some spirits. Like you do. 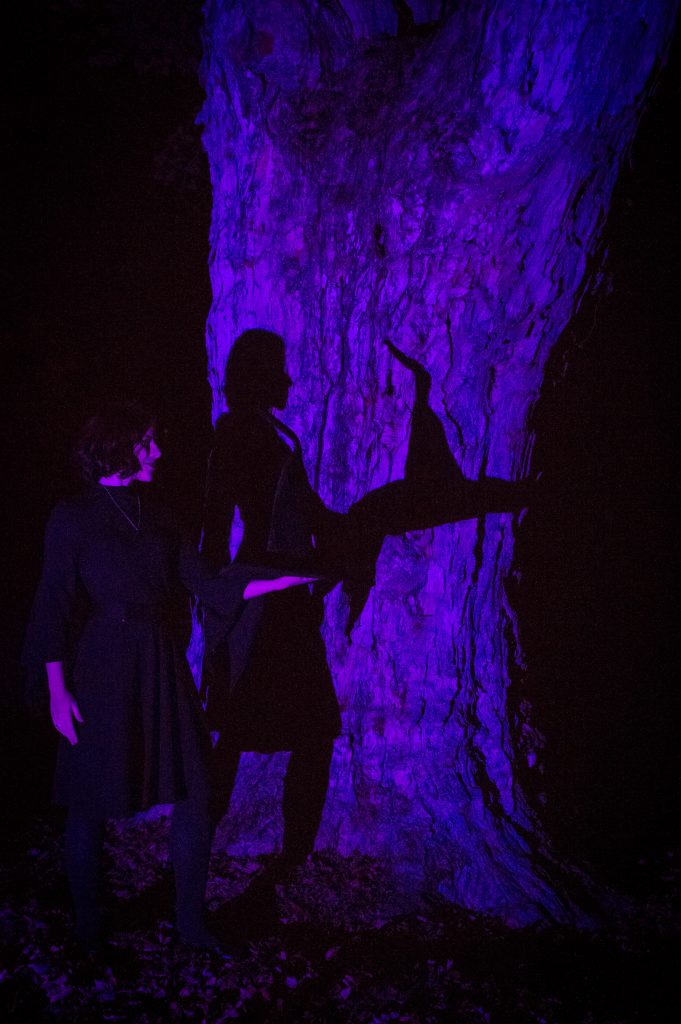 I brought lots of fun things to play with, including a fog machine (which we didn’t have time to use), antlers, and an LED color changing spotlight which turned out to be very useful since it get dark very quickly in the graveyard. It also turned out to be great for taking some really spooky photos. The tree turned out to be such a great backdrop for playing with the light. 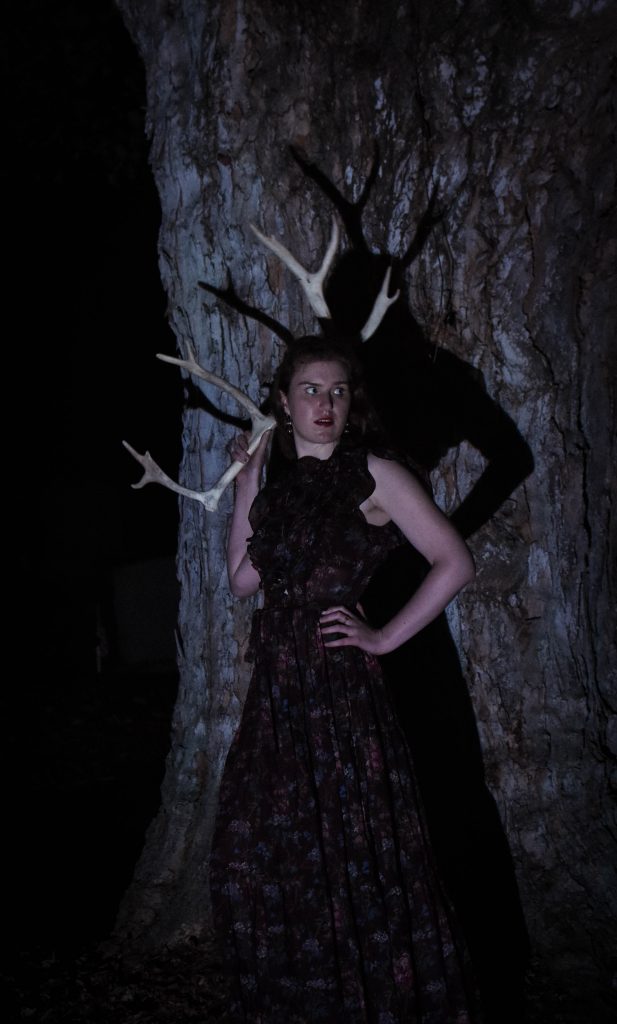 And that’s it! I can’t wait to do some more concept shoots (and more witchy photoshoot games too–winter witches, anyone?) sometime soon–they’re so fun, and such a great creative outlet. You can see Eva’s take on our photos on her flickr. Keep an eye out for another concept shoot writeup coming soon on my blog. 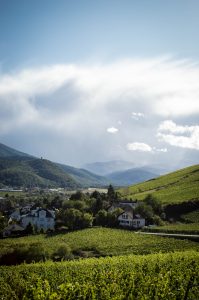 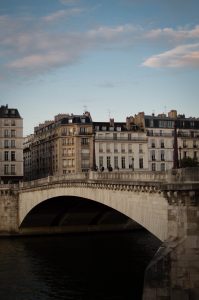 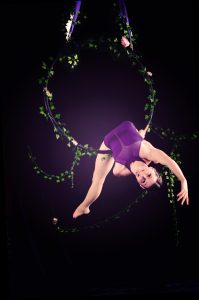